It was resolved that the local government would engage representatives of local organizations and groups in budget deliberations as well as ensure the participation of women and people with disabilities (PWDs) in governance. Also, it was agreed that a steering committee tasked with keeping the local government abreast on matters of public interest, be established. Citizens were urged to keep in touch with political wards and constantly demand accountability. A final resolution was a request for the inclusion of the #MyLG project in local government programs and budget allocations. 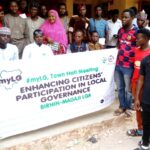 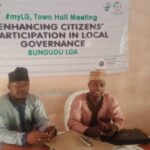