The town hall meeting was aimed at educating the citizens on the constitutional roles of local government officials. The meeting also provided a platform for people to ask questions on matters that affect them, strengthening the capacity of citizens to advance government accountability at the local government level.  The meeting had in attendance High Chief Egbukuyomi representing the Bale of the community and other youths from ward 6, issues discussed include youth restiveness and gainful employment for the youth. The high chief decried the high level of insecurity in their community due to high militancy activities and cultism. He said most of their youths have resolved to cultism as a way of life thereby wasting their lives to rival gangs.

The youth also decried the irregularities of the scholarship/bursary award given to youth from their region which was previously enjoyed and encouraged them to embrace education as most of their parent cannot afford the high cost of education. The chief also calls for the development of road walkways on the riverine communities and street lights. He said these are the work of the local government but they hardly can find the support that the local government is rendering to their communities. He said most of the community projects are self-help projects done by the people in the communities. They only hear about money awarded to the government for community projects but no execution has been experienced over time. The meeting was a participatory interactive session where all present felt free to express their mind.

In conclusion, the community journalist encourages all to participate fully in the ongoing voter’s education and ensure they learn how to go about registering and getting their PVC. He stated that the PVC is the absolute power the citizens wield to choose leaders that will represent them. They were encouraged to shun vote-buying and choose wisely in the next general elections. 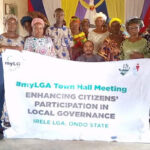 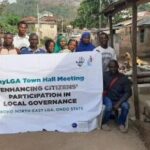