The women at the meeting complained about the risk their children pass through in crossing the expressway to go to school which makes most parents withdraw their wards from government schools and enrolled them in private schools. The women also lamented the non-availability of health facilities and shortage of staff at the health centre. This creates a challenge in providing medical care for their children when they fall sick. They had to travel to a neighboring village for proper medical care. The women pleaded with the two councilors to take their demand at the meeting to the chairman for quick action.

In conclusion, the community journalist encouraged all to take advantage of the continuous voters’ registration exercise to register and collect their PVC and this is the power that will enable them to choose a leader that will represent them. The councilor from ward 4 also pleaded with the people to be patient and promise to convey their message to the chairman. The High Chief also advised the community residents to embark on self-help projects as this has been done in some communities and issues of basic interests like the construction of classrooms was resolved. He said all cannot be left to the government alone, that the people as well need to contribute their own quota towards the growth and development of their local government. 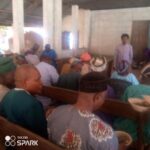 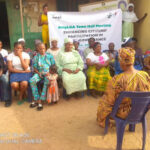