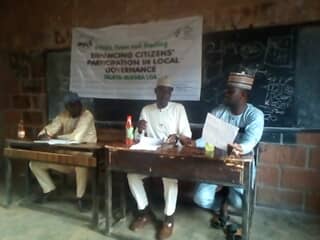 The local government is the third tier of government and is meant to be the closest to the people as rural development revolves around it. Sadly, the reverse is the case in many parts of Nigeria, as this supposedly closest system is far from the people, spurring disinterest by citizens in matters pertaining to governance. This disinterest ensures that activities of governance are left in the hands of a tiny part of the populace.

While a few people can contest for political office, the participation of everyone goes a long way in reducing the level of distrust between the government and the people, educating the citizens about governmental activities and keeping the abuse of power in check.

Such participation further ensures that citizens can hold duty bearers at this level accountable to deliver on their responsibilities, and can develop ‘the voice’ to demand better from government at the state and federal levels.

On July 24, 2021, the Talata Marafa MyLG town hall meeting themed “Enhancing Citizens Participation in Local Governance” sought to educate citizens on the constitutional importance of youth involvement in local government activities. The meeting also provided a platform for citizens in the audience to ask questions on matters that affect them, strengthening the capacity of citizens to advance government accountability at the local government level.

The Director made a presentation on how youth can contribute to the betterment of the country rather than continue to focus on what the country can do for them. He emphasised the importance of trust, honesty and modesty in governance, enjoining citizens to elect leaders who are known to be fair and just.

The Galadima Ward councillor also called on people to stop overburdening the local government officials on issues outside the constitutional provisions of their roles and responsibilities. He emphasised that the government alone at all levels cannot provide all that the citizens require from it without citizens’ active participation in good governance.

During the town hall meeting, some critical issues were raised including the involvement of groups and associations in local government activities that require active community participation; the creation of Talata Mafara Social Media Organisation; and the utilisation of the local government internally generated revenue (IGR) for the development of the area rather than being shared among the political elites.

At the townhall meeting, it was concluded that granting full autonomy to local government areas can guarantee development at the grassroots especially for Talata Mafara LGA. 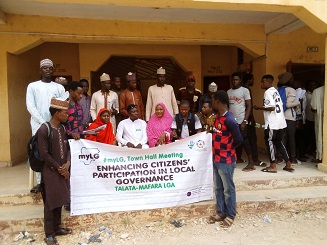 The 1st #MyLG Talata Marafa local government town hall meeting themed, ”Ensuring Active Citizens participation in Local Governance”, was graced by esteemed members of the community including traditional rulers, representatives of the Talata Marafa local government, representatives of commercial and political organizations, civil servants, and many other stakeholders in the local Government tier.

The meeting aimed at educating participants about the importance of active citizens’ participation in governance, the role of civil and commercial organizations as well as the local government in community development.

At the end of the meeting, participants agreed to ensure that LGA budget is always a true representation of the people’s development needs and that all sections of the society must be well represented by the local government. Further resolutions included full transparency in the handling of local government funds in terms of the declaration and allocations of grants received and calls for the continuity of the #MyLG project in the smaller communities around Talata Marafa local government.