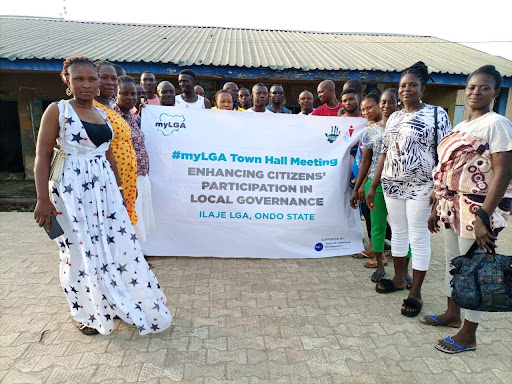 The town hall meeting was aimed at educating the citizens on the constitutional roles of local government officials, providing a platform for people to ask questions on matters that affect them, and strengthening the capacity of citizens to advance government accountability at the local government level.  The meeting had in attendance youth representatives from the various wards in the local government. Discussions were centred on empowerment, scholarship/bursary, financial loan support, and other social amenities that can be provided by the local government to support community growth and development and to also reduce the crime rate in the society.

The youth leader from Mahin 1 lamented that youths in their community did not benefit enough from the scheme while other youths also supported the motion. Youth restiveness was also a serious concern as many related that to the high level of insecurity in the local government. Most of their people live in fear. Cases of gang rivalry fights, militancy, and other antisocial activities are prevalent in the community. The youth also affirmed that the police within their communities could not curtail most of these crimes. Unemployment was cited as the major cause of these nefarious acts within that community as it leads to frustration thereby making the youth vulnerable to antisocial individuals that take advantage of them.

The citizen journalist encouraged them to learn skills and embrace self-employment, participate in government programs and try to be agents of change within their communities . He advised them to champion peace and promote the spirit of “leave no one behind”, equality and support the democratic system most especially at the grassroots level.

In conclusion, the youth pledged to support the fight against unlawful possession of arms by youth, antisocial behaviours, and youth involvement in violence. A group photograph was taken at the end of the meeting and refreshments were served to participants.